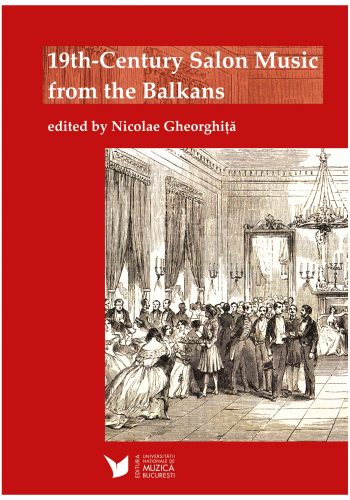 19th-Century Salon Music from the Balkans

In the past years, the Doctoral School and the Research, Innovation and Information De­partment of the National University of Music Bucharest (UNMB) ran, in partnership with universities, research institutes and specialized professional bodies in Romania and ab­road several major interdisciplinary projects of interest in local and international musicolo­gical research.

One such project aimed to study the remarkable socio-cultural institution which deeply marked the long 19th century, the salon, not only considered for its musical contribution, but also seen as an essential tool in the affirmation of modernity, an instrument of transfer, one to construct the social and cultural identity of European elites and in particular of those develop­ing in the Balkans in their intense wish to synchronize with Western taste.

Despite the Covid-19-generated avatars, the successful dedicated academic collabora­tions determined the UNMB to continue its projects, so that in 2020 it created the Centre for 19th-Century Music Studies (CNCMS), three issues of Musicology Today and of George Enescu’s Symphony no. 4 completed by Pascal Bentoiu with an introductory study

An exceptional outcome of both these collaborations and the project itself is  the anthol­ogy 19th-Century Salon Music from the Balkans, the first of its kind. The seven researchers who ventured to investigate archives in order to identify, and to carry out the critical editing of, the thirty-two miniatures are renowned musicologists from Austria, Cyprus, Greece, Serbia and Romania: Haiganuș Preda-Schimek (Vienna), Avra Xepapadakou (University of Nicosia), Alexandros Charkiolakis (The Friends of Music Society, Athens), Marijana Kokanović Marković (University of Novi Sad), Dalia Simona Rusu-Persic (George Enescu National University of Arts, Iași), Emese Sófalvi  (Babeș-Bolyai University, Cluj-Napoca), Erich Türk (Gheorghe Dima National Academy of Music, Cluj-Napoca).

The featured miniatures have a certain diversity of timbral combinations: if most of them are for solo piano, there are also some duets for voice and piano or even pieces for voice with cello and piano accompaniment. They are introduced by remarkable studies with comprehen­sive analyses, comments and annotations on each group of works, their origin, authors, so­cio-cultural context and targeted audience etc., the musicologists thus offering an illustrative synthesis of the genre which had a profound effect on the construction of musical ambiances of 19th-century Balkans elites, in this case Greece, Serbia and the Romanian principalities of Wallachia, Moldavia, and Transylvania. (Nicolae Gheorghiță, Editor)